Before Madeleine was born, we had a small basket of toys for her. Inside the basket were 5 toys. A narwhal, a loopy ball (the official name I just gave it), a light up seahorse, a Minnie rattle and these animal chain links. PLENTY of toys for a tiny baby, I thought.

And then I found this light up firefly and my whole relationship with toys changed. As I watched Madeleine grasp it, shake it, and try to eat it, I realized how FUN toys are. Not only that, but as she’s been rapidly growing and developing (I literally ask her if she ate my baby because I have no idea where my little newborn went), it’s been fun to see her begin to engage with her toys.

That said, here are our favorite toys for this 3-6 month stage, where they are just beginning to grasp and chew and throw. 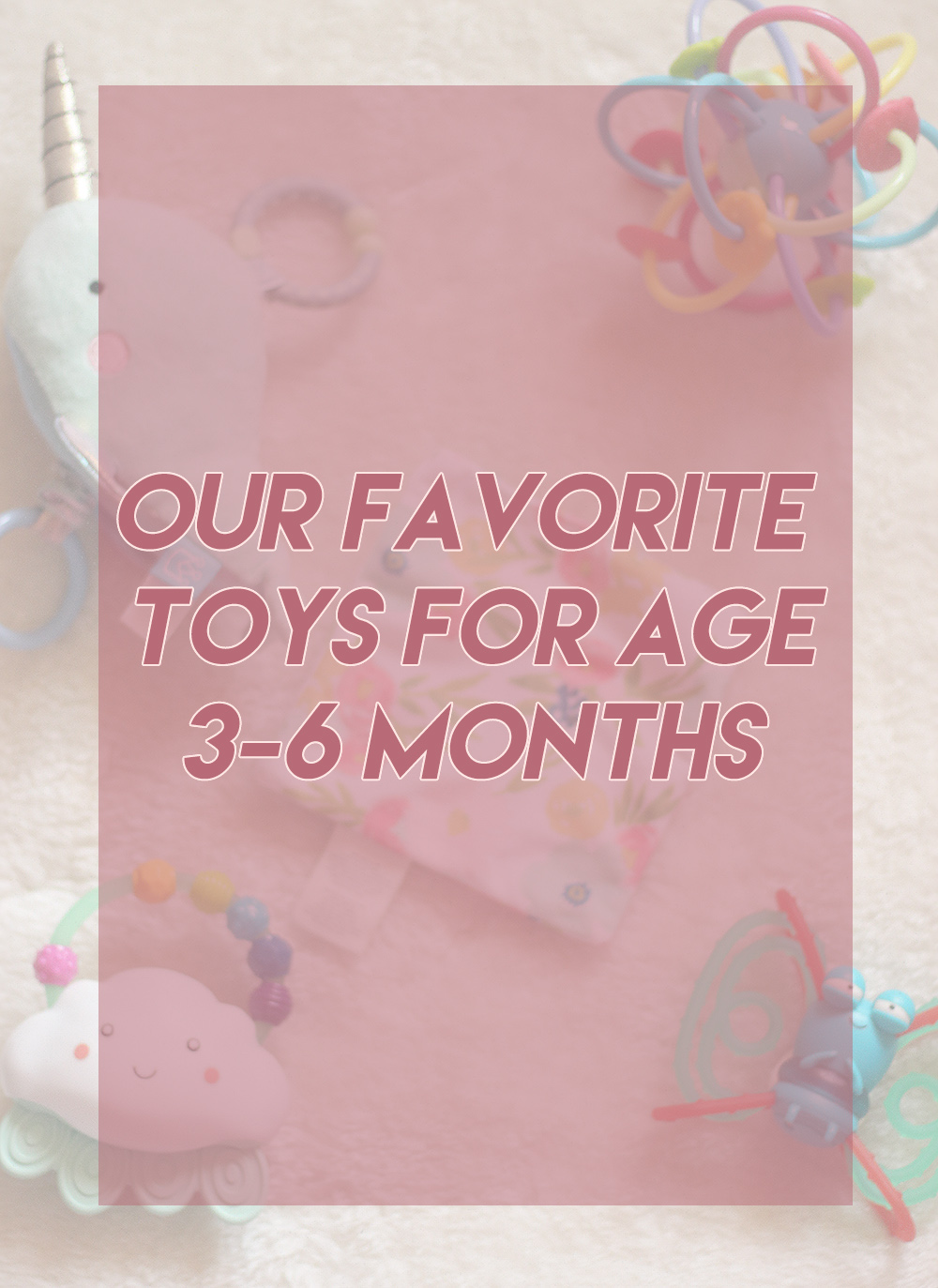 We grabbed this because it was on sale and she had just developed a thing with lights. It’s hard to believe that when we first placed it in her car seat with her, she only got her hands around him every few tries because she still wasn’t able to see something and grab it. Now she grabs Firefly Frank, shakes him, chews on him and throws him. We love this guy! 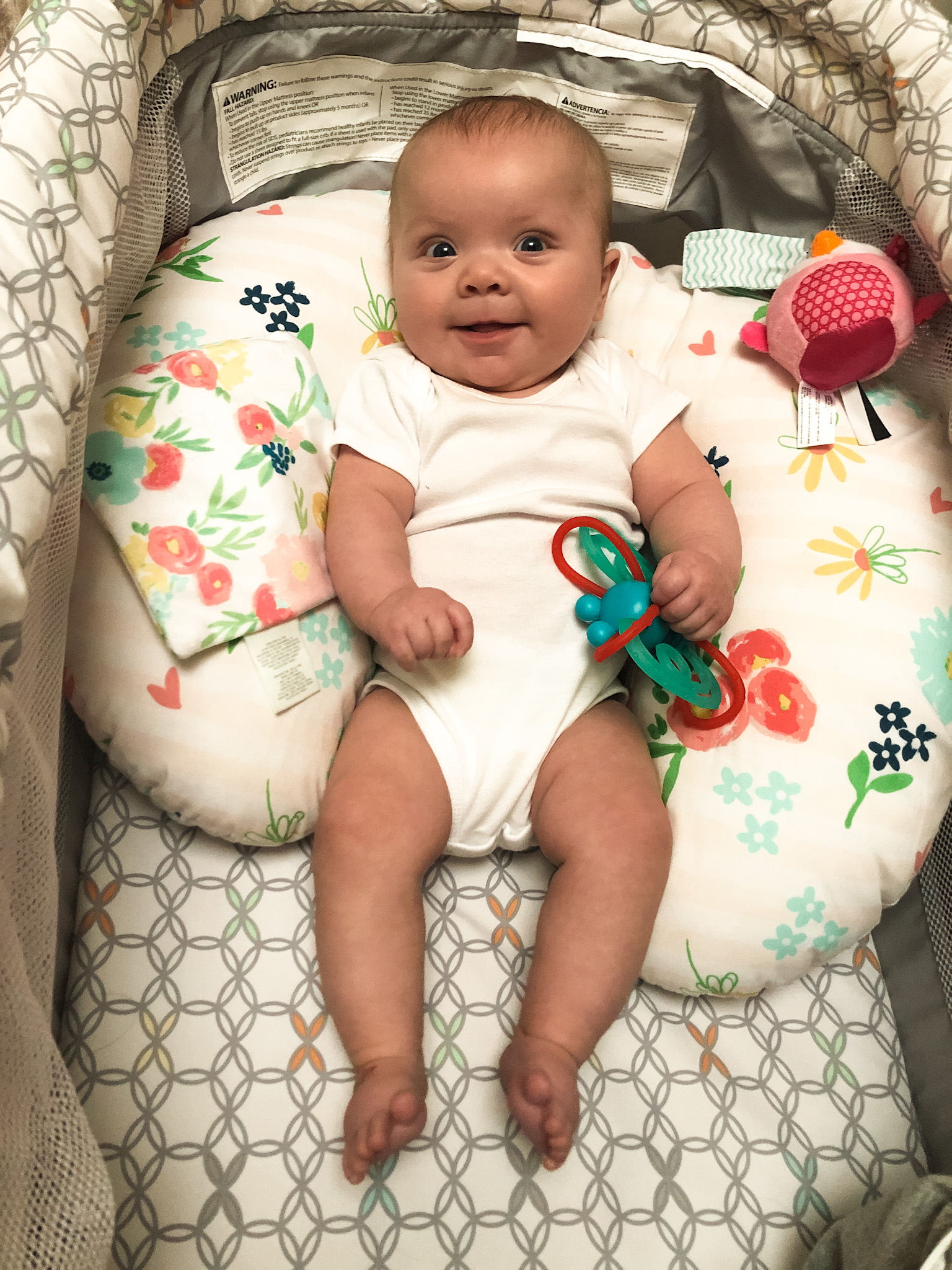 One day we thought we had lost Firefly Frank and I was so upset that I insisted we buy his buddy, this light up rain cloud rattle. This is, hands down, one of her favorite toys. She lights up when we give it to her. We are big fans of B. Toys. 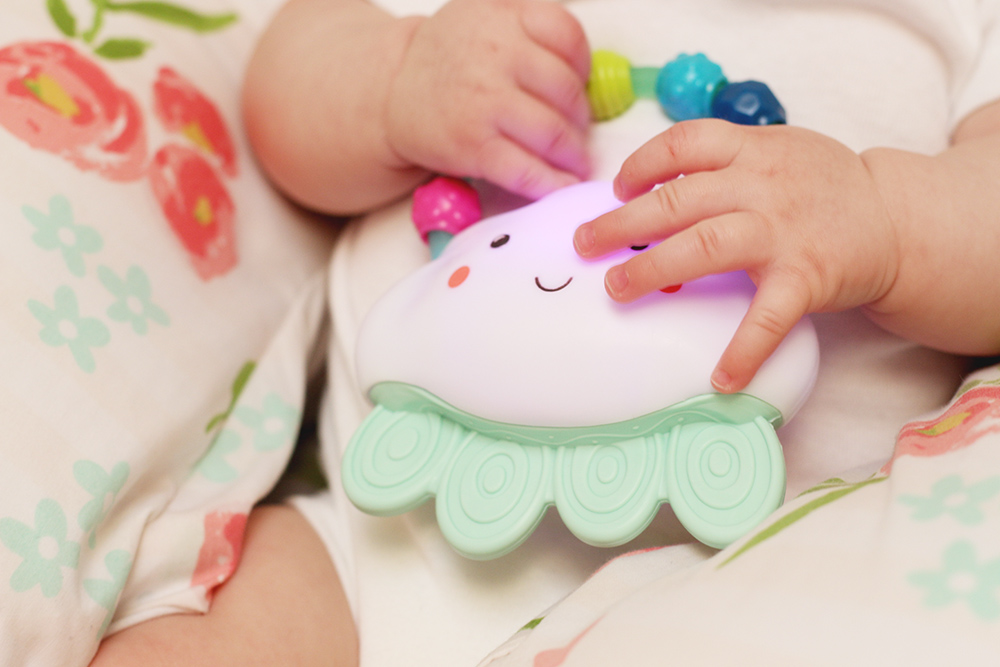 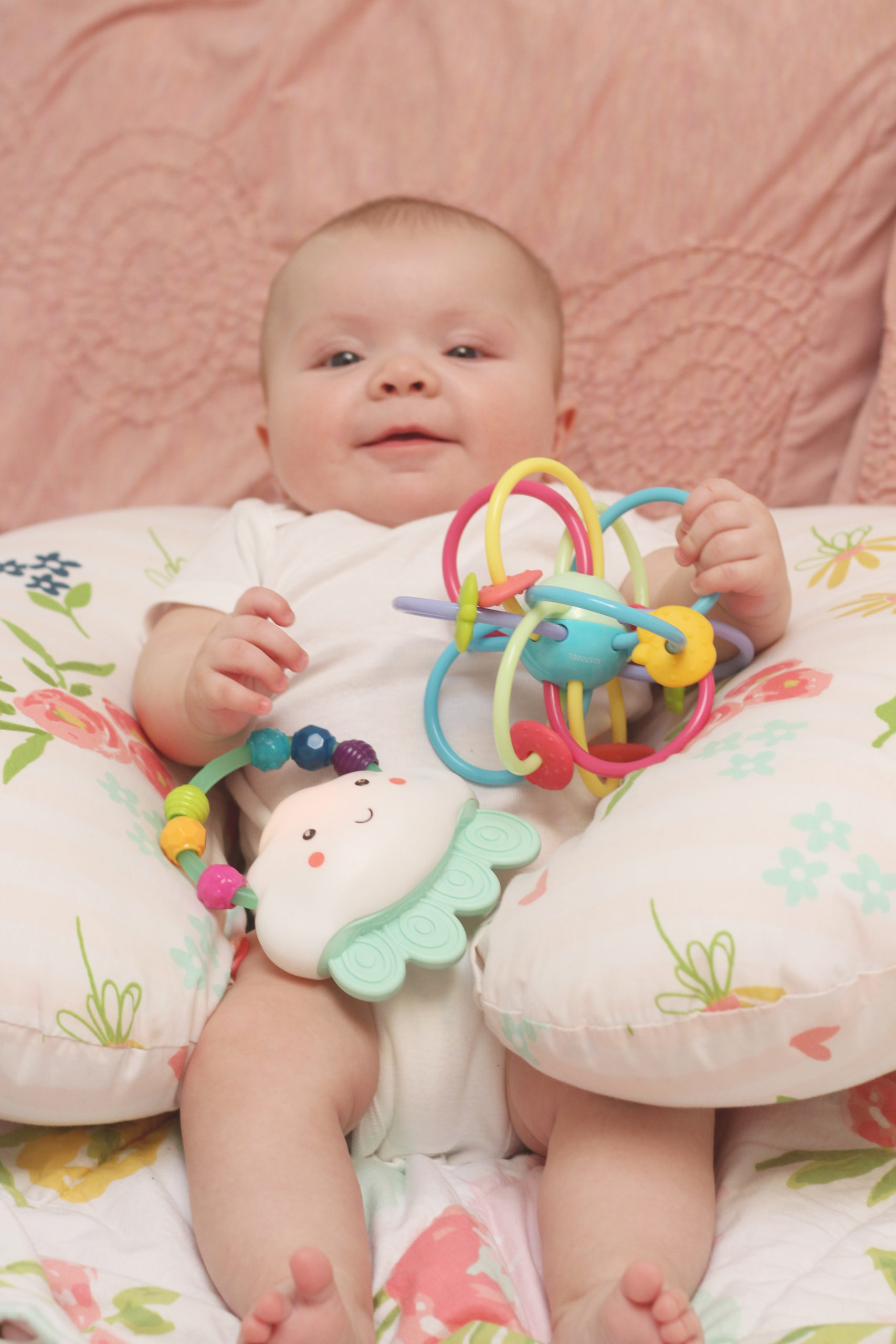 We were perusing the baby aisles at Target and I saw these two pieces of crinkle paper (in Madeleine’s pattern!) and I IMMEDIATELY put them in our cart. Homegirl AGGRESSIVELY LOVES these crinkle papers. She crumples them and flails them around and eats them. The only thing I don’t love about these is that I’m paranoid they’ll get stuck on her face if I look away. First time mom over here, so we only crinkle paper with adult supervision.

This was one of the toys we got before Madeleine was born and at around 3.5 months she was finally able to love it how I hoped she would. She is really funny with this – sometimes she’ll stick her hand in the loops and wear it like a bracelet. She loves chewing on all the parts of it and it keeps her entertained for a LONG time. Took me awhile to get a picture of her with it because she flails it about. 🙂 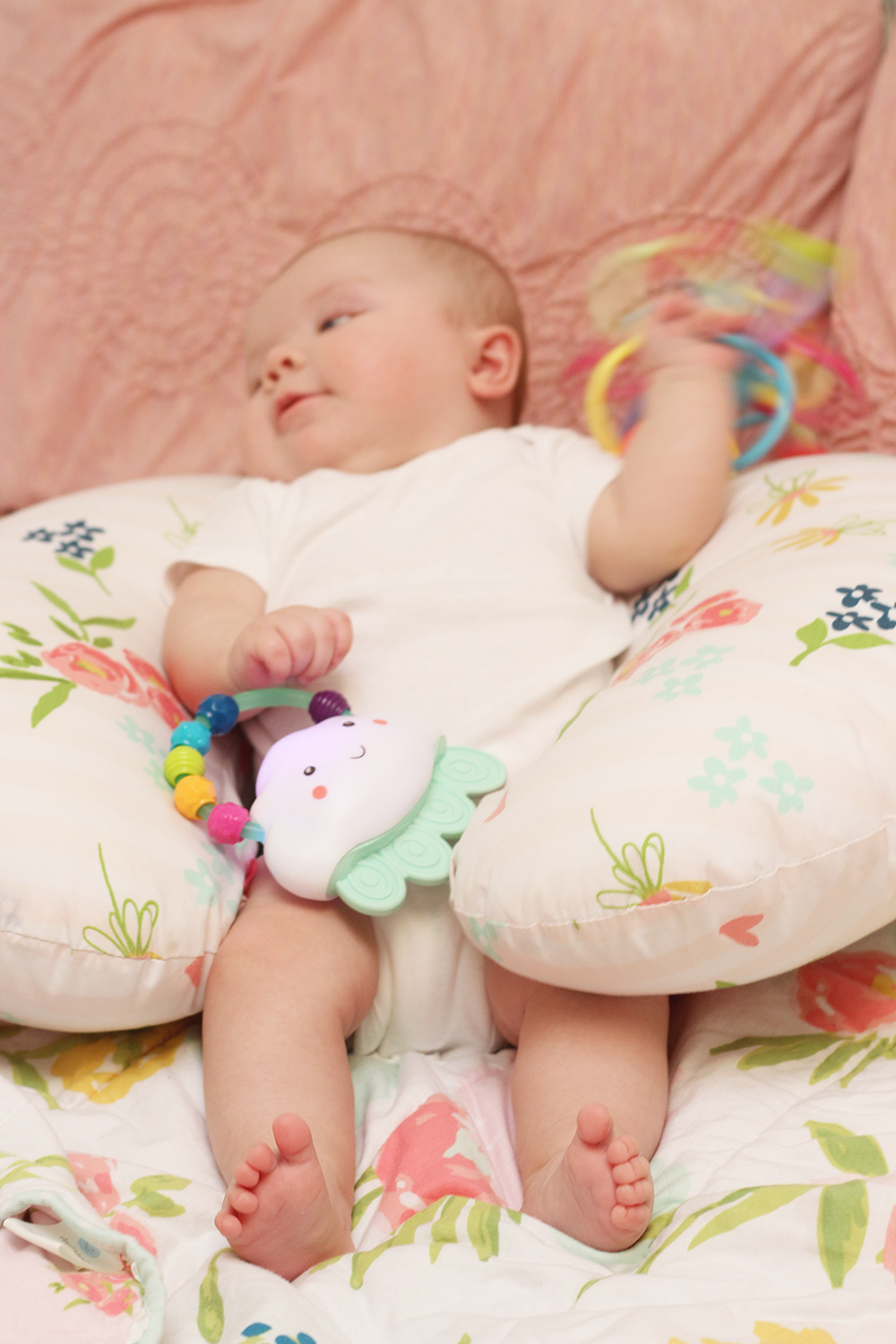 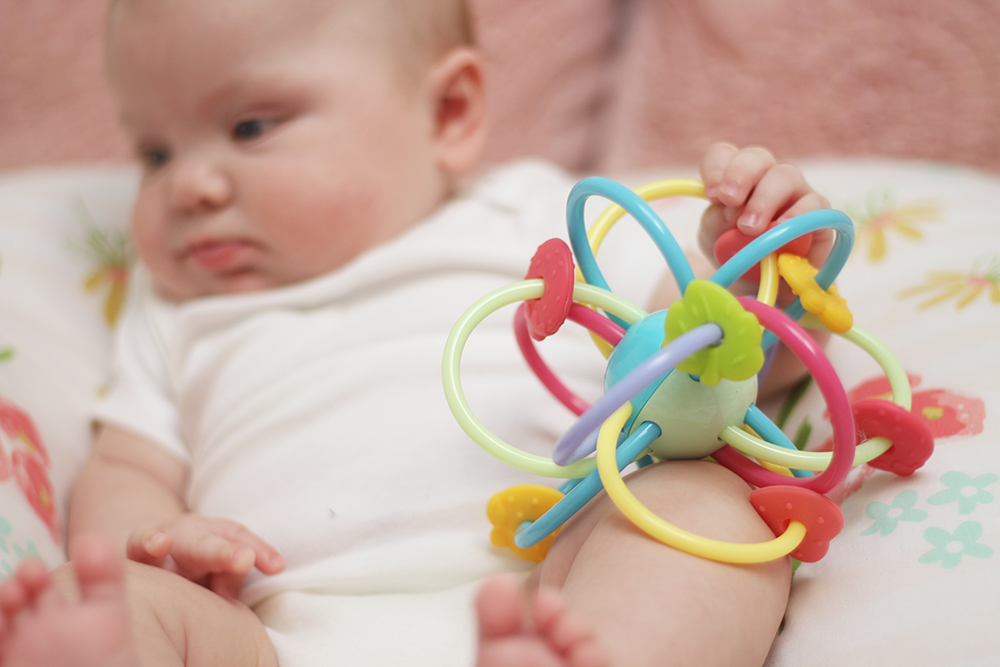 and finally, good old Mr. Narwhal. We kept him on the car seat and had fun trying to get her to grasp the ring on it, but now it’s attached to her activity mat where she now tries to grab him with her feet, easily grabs the ring and loves it so hard she often won’t let go. 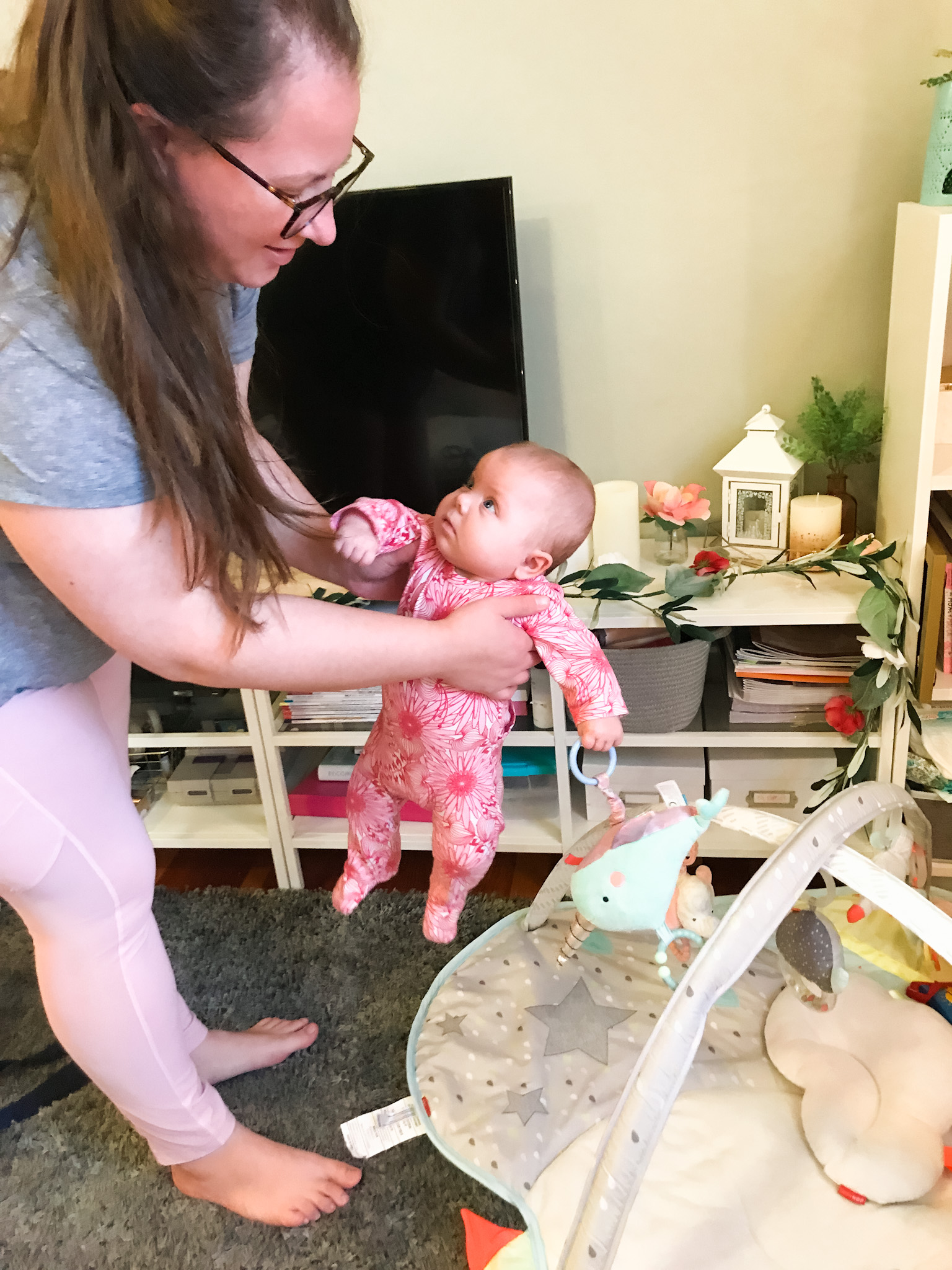 These are what I truly consider Madeleine’s first toys and I will always look back on this season fondly. She never leaves home without one of these in her car seat and I have loved watching her figure out how to play.

For the record, we couldn’t have half the fun we do with these toys without our Boppy (similar on amazon, exact at target)or our Skip Hop Activity Gym. 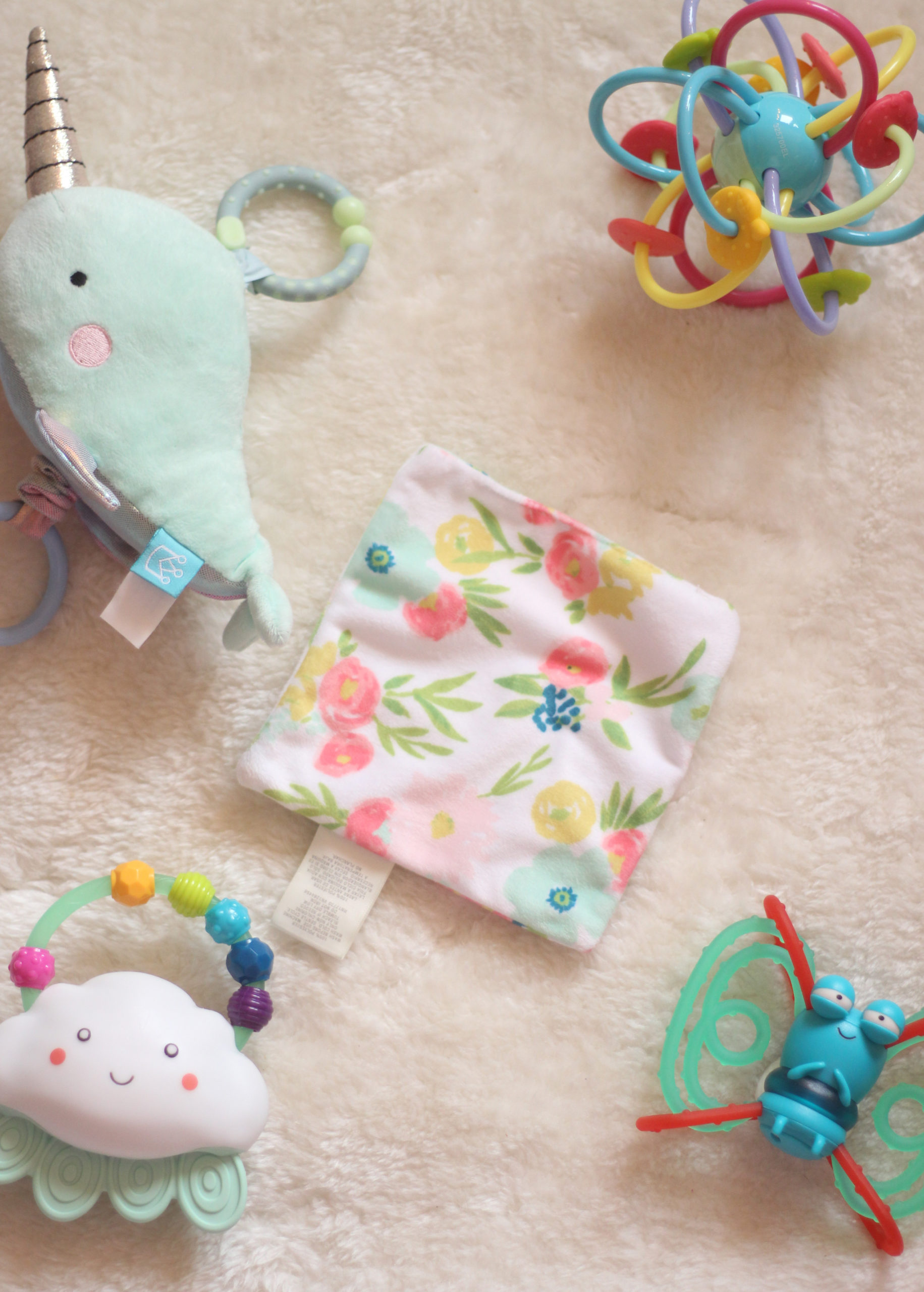