Hello everyone. It’s been a hot minute since I’ve done a Five on Friday. I’ve had a really overwhelming week and I decided I wanted to flush out my emotions here, so I want to share with y’all 5 things I’ve learned in my first week of being engaged.

First I want to say this. I know people who became “relationship gurus” after two months of dating someone, or who start sharing very expertly crafted how-to wedding planning posts while they’re still engaged or marriage wisdom a month or two into their marriage. To each their own, but I can only share my own personal experience which is constantly changing and growing. But I had a pretty major life event happen and have been spending a lot of time deep in thought. 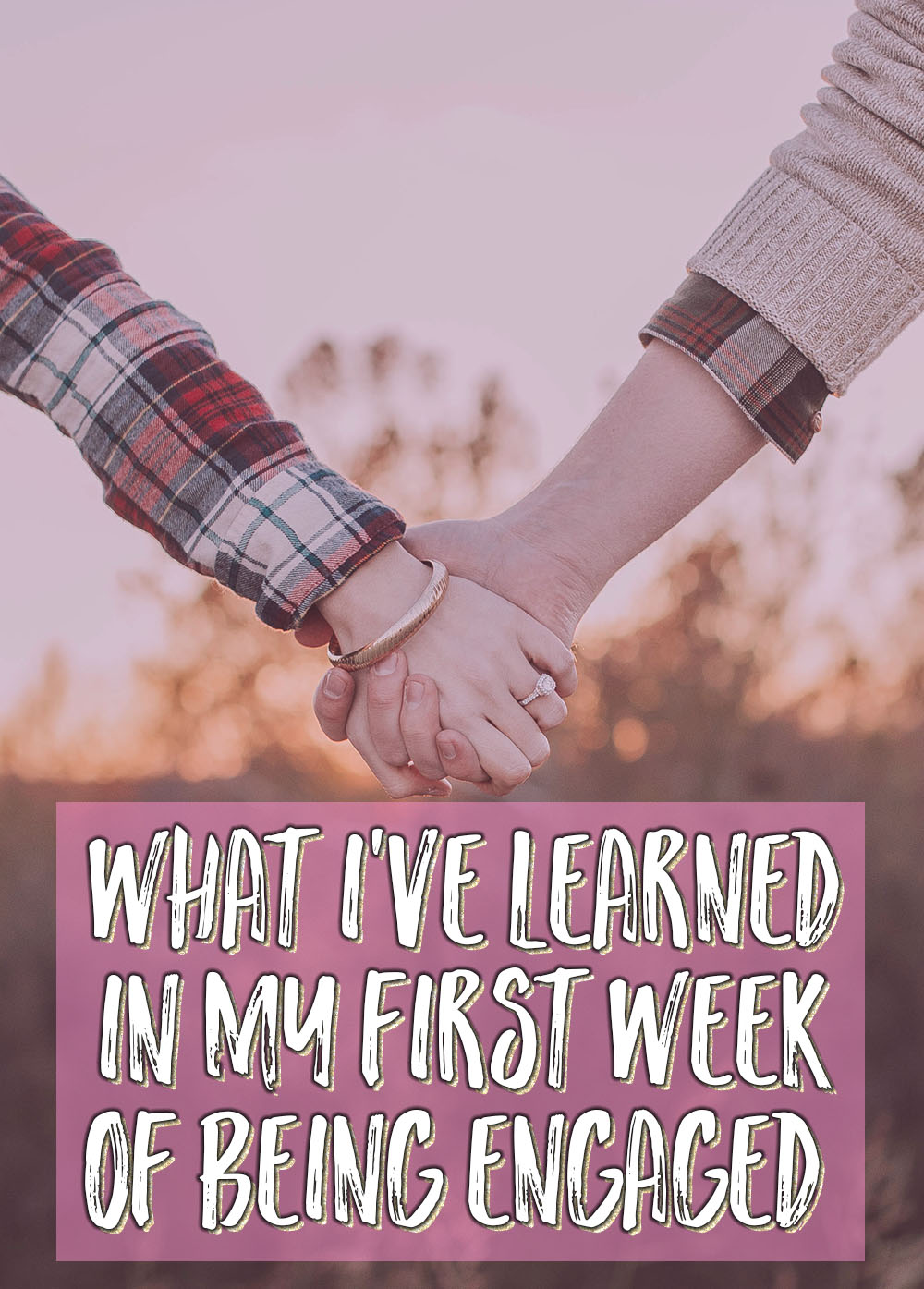 Here it is. Five things I’ve learned in my first week of being engaged.

ONE // I hate attention.

I knew this anyway. I hate birthdays and speaking in front of people and cutting my hair or getting new glasses or anything that might draw any sort of attention my way. Apparently it doesn’t even matter if it’s something exciting, I still hate attention. I haven’t responded to any of the texts or comments or anything because I am kind of hoping people have already moved on to something else.

TWO // I don’t feel any different.

People (mostly my mom) kept asking how it felt to be engaged and I just shrugged and said “the same.” The ring is sparkly and I like looking at it. Justen grabs my hand and looks at it at least once every time I see him. But I feel the same. I’m the same me, I have the same priorities and hopes and dreams and personality. I don’t know if I’m supposed to be bouncing off the wall excited or something but I just feel the same.

I’ve cried over the same problems I was crying about before Justen proposed. I’ve struggled to get out of bed with exhaustion and depression at the same rate I did prior to having a ring on my finger. Justen and I both acknowledged last year that we’re both realistic about marriage – it’s not going to fix us. From what I’ve read and I know, marriage is an instrument of healing in monumental measures, but it also brings new problems and issues and broken parts to the surface. There’s nothing we’ve felt tension about that has magically been fixed by having a ring on my finger. It puts a light at the end of the tunnel for the things that really weigh heavy on us (not having our own space, having to say goodbye every night, etc) but there’s not been an immediate solution to anything.

I’ve spent my whole entire life dreaming about my wedding. I wanted the party and the pretty dresses and sentimental trinkets and the whole nine yards. and the more that I am finally seeing the price tag attached to these things, I care less and less. I don’t want to spend thousands of dollars I don’t have on things that will cause me months of stress in a time when I’d rather be spending my energy preparing to build a new family with a strange and mysterious creature known as a male. The more people ask me questions about a wedding, the less I actually care about that portion of it. I never expected to have this kind of response. It’s coming from really deep within me, too. I actually feel my lack of caring about a wedding pulsing through my veins. It’s weird. I can’t even describe it, but people usually talk about being all excited and giddy with overwhelm at the thought of a wedding. I’m the opposite.

FIVE // There are a lot of important people in my life.

The one thing I really care about is being surrounded my friends and the people who have poured years and countless hours into me. Justen gets to marry me because of the people who have stood around me and protected me, who have sat with me when I’ve worn myself out, who have seen me grow and shed layers of immaturity and stupid ambition. and there are a lot of those people who fall into that category. Perhaps it’s because I’ve spent a long time growing up, but there are a lot of people who have contributed to my becoming the person Justen is choosing, and I want to honor them by having them around me. Weddings and funerals are the only times I can see that people travel to celebrate someone’s life, and I don’t want to wait until I can’t be there to hold the flowers.

For those of you that have been engaged, what was your experience? Am I normal in any of this? 😀 I’m going to try and not go on and on and on about this on my blog, but I tend to run straight to my corner of the internet for help in processing things – usually they are sad, breakup things, so this one is different, but it’s still overwhelming and big.