The Bachelorette has returned.

and I’m kind of excited because this show is a train wreck and I love it.
but I have a huge issue with this season of The Bachelorette. 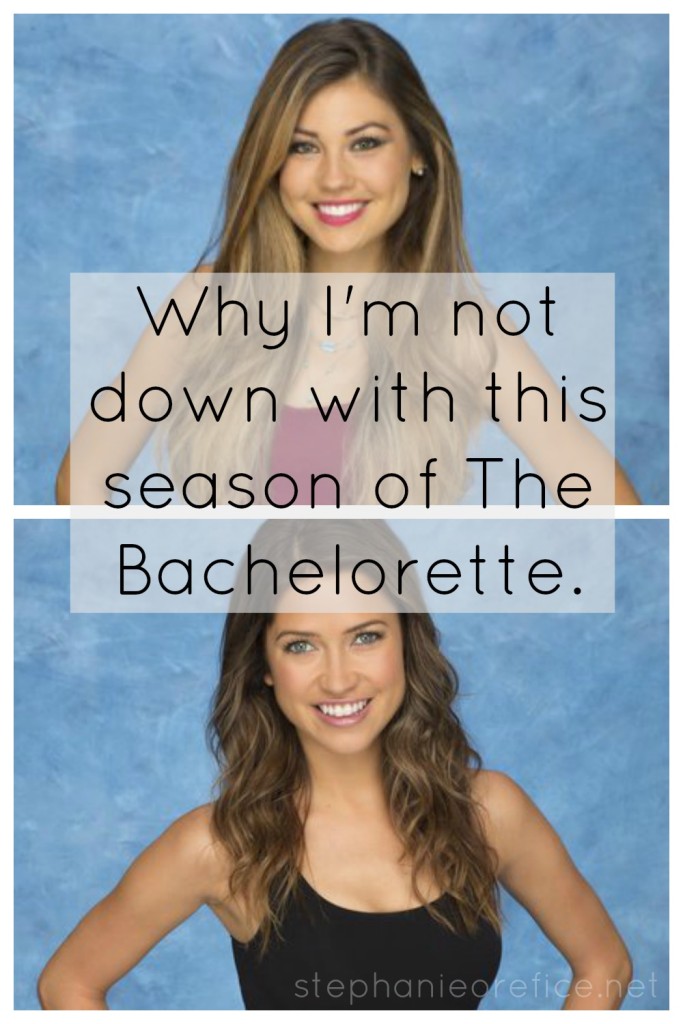 In case you didn’t know, here’s what normally happens: one woman gets 25 dudes that all want to date/marry them.

Here’s what’s happening this season: two women from last season of the Bachelor are starting on The Bachelorette. and then all these guys come… and vote which one of the women stays.

Now that you’re caught up, let me stand up on my soapbox.

These women are more valuable than that. This whole Bachelor franchise already sucks because it sets women up to compare and face potential rejection. and I get it. They signed up for that, and obviously these two signed up for it.. but that doesn’t mean that’s it okay.

Normally at the cocktail party, the Bachelorette would sit around and be evaluating the men and figuring out who they want to stay, but in this case… the men are sitting around CONTINUING TO CHOOSE BETWEEN THE TWO WOMEN. The power is still in the hands of the men. What’s the point of having The Bachelorette if the men get to choose what woman they want? Isn’t that completely contrary to what the whole point of letting the women have the control is?

Don’t get me wrong. I’m not normally all GIRL POWER or anything, but seriously. Not okay.

When I watched The Bachelor last season (which was my first time) I was so heartbroken by the way the women acted. I wanted to jump into my TV ALL OF THE TIME and hug them and say “sweet girl, the validation of a man you barely know isn’t valuable. You are better than this.”

and now two of those women – two women that made it fairly far in the show – are back in a place where they are looking for the validation of men they barely know. and it BREAKS MY HEART.

Let me be real: I’m going to be watching this train wreck. But I am absolutely heartbroken that these women are having to endure this AGAIN.

and I just want for women everywhere to remember that they are better than having to prove to someone that they are better than the person next to you. I don’t care how sparkly her dress is, how pretty her hair, how long her legs.. you deserve someone who hypothetically steps out of a limo and sees you and regardless of how sparkly the other dress, how pretty the other hair, how long the other legs… has eyes for you and for you only.

You are the bachelorette. The men of the world are your suitors. It is not your job to out-shine the girl next to you in the sparkly dress.