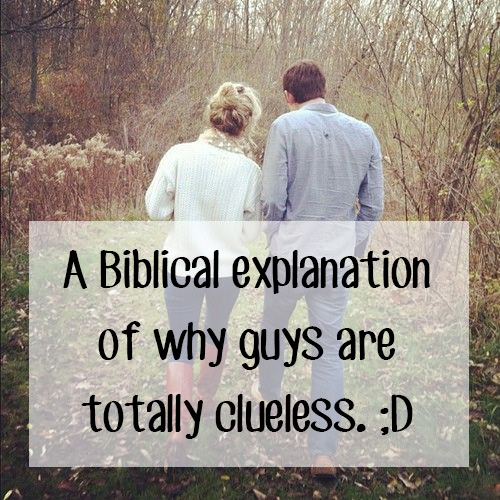 If you’ve been reading my blog AT ALL, you might have picked up on the fact that I really like a boy. In case you need to be caught up, I blogged about it

Mary-Keith is earning ALL THE JEWELS in her Heaven crown because she is my #1 go-to person whenever he says my name or acknowledges my existence.

Today I texted her this screenshot because it’s literally the most accurate thing I’ve ever seen in my entire life… today. 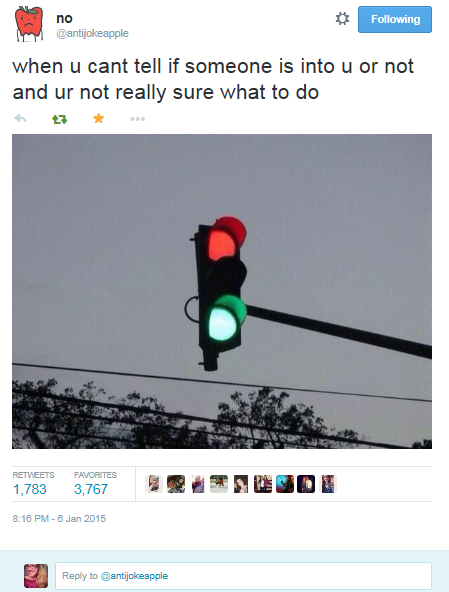 Last week I was at Rhoda’s house and her parents (who I love!) were telling me about their first date and when they were dating and her dad was really blunt and he said “you’ve gotta tell guys how it is. We’re just stupid sometimes.” and he kept saying that boys just don’t get it.

I keep thinking “if this boy is interested, he’ll do something. I’m not playing games or trying super hard to hide anything, so I can just kind of…. wait.”

Then I’m reading my Bible. Because I’ll be honest. I’m gonna read the whole thing in 2015… I just hadn’t started. and I’ve read through Genesis so many times that I tend to move kind of slowly through it so that it’s new to me. Okay good, now that I’ve admitted how far behind I am on  my reading plan….

So I get to the part in Genesis 2 about God and Adam and Eve. You know. God makes Adam, puts him in the garden, tells him the rules and then GOD (NOT ADAM) says “It is not good for the man to be alone. I will make a helper.” but then he puts Adam to work.

Then Adam gets to work and there’s no helper for Adam (I wrote more about that here). Okay. Now we’re to the good stuff. The explanation.

The Bible explanation for why guys are totally clueless.

#1. GOD said it wasn’t good for the man to be alone, not MAN.
Sometimes the guy isn’t even looking for it. He’s not on the hunt or on the prowl; he has healthy, fulfilling friendships and a solid trust in God and God’s timing. In the beginning God created the earth, formless and empty. It is God himself who often creates the NOTHING space to be filled with the SOMETHING he has in mind. So maybe guys are clueless because God hasn’t yet created the NOTHING space.

#2. So the LORD GOD caused the man to fall into a deep sleep…
The man slept through the whole God creating a woman thing. This was probably the grace of God, because God understands women and men… um… don’t always. I wonder if God had a little talk with Eve after she was created. Like did they look at sleepy Adam and God kind of caught her up on creation, or something? Who knows. The point is, Adam slept through the whole creation of Eve. He was so out of it.

#3. Then The LORD GOD… brought her to the man.
I’m not going to go on a tangent about pursuer/pursue-e or anything, but God didn’t hide Eve from Adam. There was no pursuit, no games, no nothing. God created Adam, put him down for a nap… created Eve, and then brought her to him. Adam could have spent his whole life searching the Garden for his match, but if she hadn’t been created the whole thing would have been in vain. God didn’t create  the heartache, the games, the wait. He straight up did not create that. God created the NOTHING space. Then he filled it and presented it.

Maybe guys are clueless (to an extent) because they were never created to pick up on clues and hints and subtleties. Maybe God never whispered “Adam, if she laughs at your stupid jokes she probably wants to be flesh of your flesh.” and maybe God never said to Eve, “don’t text him back right away, and try to be busy so he doesn’t think you’re too desperate, and maybe to be a huge ball of confusion joke about setting him up with your friends.”

I’ve been wrestling with the whole “what is the point of telling the boy I like that I like him” thing, and all the advice in the world hasn’t convicted me like this simple Scripture that I’ve read a gazillion times before. Maybe the point isn’t because I want to pursue, or I want to make a move or anything. Maybe the point of telling him is because I need to trust that God started the whole guy/girl husband/wife dynamic not by pursuit but by a simple bringing of one to the other.

I guess it’s time to stop eating gluten free cookie dough and listening to sad songs all the time and start praying about letting God bring me to him, whether it is for the end result I want or even just for developing my faith muscles. And on a scale of 4-2958, I am -5 excited about that. Prayers appreciated.