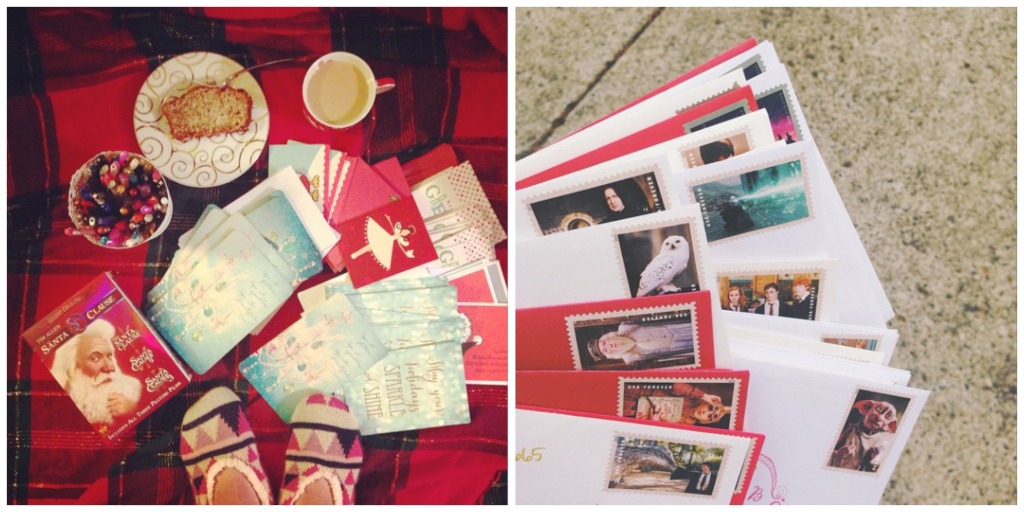 Sometimes it’s the little victories, you know?
Like sometimes I get out of bed having only heard two different alarms go off on my phone.
Sometimes I make it an entire day without having any dairy or gluten.
And sometimes I stick to the whole cash-only budget system.

AND SOMETIMES!
After years of collecting 1/2 off cards the day after Christmas, thinking “next year I’ll send these…” SOMETIMES I SEND THEM.

I was driving home one evening, thinking “tonight is the night.” and I realized I didn’t have my copy of Enchanted, which was kind of the ONLY movie I wanted to watch. Then I opened my mailbox and the Disney Movie Club had sent me the whole The Santa Clause collection. I realized I had only ever seen the first one. It seemed like a perfect fit.

For the first two movies, I was on Pinterest looking at all the cool things. Then I remembered… oh yeah! Christmas cards!

I put 28 Christmas cards in the mail.
With HARRY POTTER STAMPS!

I was a little torn about if it was socially acceptable to put a stamp of Voldemort attempting to destroy Harry Potter on a Christmas card and then I thought… YOLO. and I did it. and I am so excited for everyone to get them. It’s like I sent a bunch of hugs in the mail.

Now I’m going to go bask in the glory of doing one thing I have wanted to do for years by watching a few episodes of an old season of America’s Next Top Model. Because I’m a grown up!