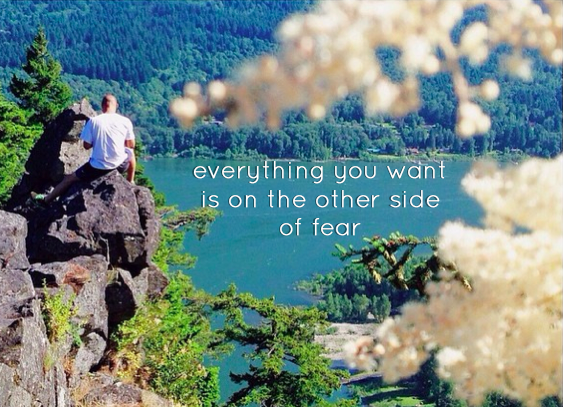 A few weeks ago I went hiking with these two crazy boys that like to climb up sides of mountains and go off the trail and basically give me heart attacks every ten seconds. Towards the top of Beacon Rock, they climbed over the railing and went marching over some rocks. One of them, Other Ryan (they are both called Ryan), told me I should follow.

Uh, no thank you.

So I stood on the safe little trail, holding Other Ryan’s water bottle and wondering how weird I looked just standing there, staring off at a bunch of rocks.

and then I thought… this is stupid, and I climbed over the railing.

But then I got to these rocks you had to climb over. Other Ryan was still convincing me to come over, and I suddenly realized how far up we were and how much trust I’d put in railings and how gravity and I never really agree and gravity usually wins.

The other Ryan (lower case o) was already on the other side and I could hear him talking and saying how nice it was and I just wanted so desperately to see what it looked like on the other sides of the rocks.

Despite all of my better judgment, I did it. I climbed over the rocks. Other Ryan kept going out farther, and Ryan was braver than I but not so brave as Other Ryan, and so we all just sat apart looking at this beautiful view of the Columbia River Gorge.

Ryan went back over and Other Ryan stayed out there for awhile, and as he came past I admitted I didn’t know how to get back. It had been so much easier climbing up and over than back and down.

He climbed back over and then showed me where to put each foot and then where to put my hands and gave me step by step instructions on how to make my way back to safety.

It has been tucked away into one of my most favorite moments, because I don’t often face my fears. Sometimes I think physical fears are easier to confront than emotional fears. Like so what if I had fallen off the cliff and died. That’s better than being honest about how I’m feeling and then having to live with rejection or lose friends or whatever. Or so it can seem.

Of all the pictures I have taken all year, this is one of my most favorite. It was a moment I had been brave but still sat there kinda scared but also amazed and excited and at peace. Climbing over the rocks is just half the battle, because you still have to keep deciding what to do from there.