Sin always does damage to your soul.

…or something. You get the gist.

I am a sinner, and a pretty good one at that. I wish I could say that I always stumble into sin or that it happens before I can stop myself, but it’s not. More often than not I consider my options, weigh the consequences, and then I sin. Sin, for me, is usually well-thought out and very intentional.

There are days, like today, when that makes me physically sick. I woke up and didn’t feel good because I woke up with a guilty conscience, remembering my decision to sin and how every single time I decide to sin I think “well, that surely was not worth it.” All sin I decide upon, not just specific ones. When I gossip or when I entertain inappropriate jokes with certain friends or when I fuel the hypocrite fire within me. It all is fruitless and does nothing but leave me feeling sick.

Last night as I was contemplating sin, I wasn’t paying attention. I was just thinking. I was brushing my teeth and was so caught in the middle of listening to the Voice I love and the one I hate that I carelessly knocked over the reed diffuser in my bathroom. Frustrated, because that stuff is so hard to clean up, I began to wipe it up. I threw away some bobby pins from the bathroom counter and tried in vain to soak it up with kleenex, and then wiped it off the back of my phone.

So imagine my frustration when I laid down and went to set my alarm and I realized that despite my best efforts, that reed diffuser oil stuff somehow got inside of my phone. This morning I woke up and remembered last night’s sin-entertaining carelessness, and thought, “perhaps I just dreamt it all,” in the same way I sometimes dream that my hair falls out and then am delighted to brush my hair out of my eyes when I get out of bed.

but it wasn’t a dream. It was real. I stared at the phone and pondered the awful pain in my heart and decided that it was definitely real.

I think I am addicted to sin. Not just one particular sin, but sin in general. Then I have these moments, like right now, where I have tangible reminders of the consequences of sin. Casualties in the war waged on my soul. and I think myself out of it. I take a shower and think, or I play the piano and think or I drive around aimlessly and think. But I rarely, if ever, fall on the ground in surrender and ask for help. Because that sin is lingering in my heart. Because even if I think I can stop and evaluate the price of sin, there is so much more to it. I say “I will share this piece of information I promised not to tell, because they don’t even know the person so it’s not like they’ll find out…” and think that because I have eliminated some sort of natural consequence, I have eliminated all spiritual consequences. but the spiritual consequences of sin in my life cannot even be comprehended.

So my phone has this weird, obvious pattern from the cucumber melon oil from the diffuser in my bathroom. 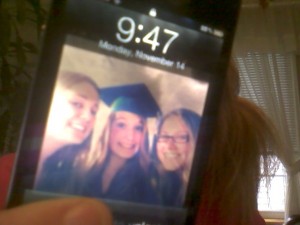 but that doesn’t bother me as much as the awful, painful pattern of the aftermath of sin in my soul. and for some reason, it’s made me think of these words of Clive:

“It would seem that Our Lord finds our desires not too strong, but too weak. We are half-hearted creatures, fooling about with drink and sex and ambition when infinite joy is offered us, like an ignorant child who wants to go on making mud pies in a slum because he cannot imagine what is meant by the offer of a holiday at the sea. We are far too easily pleased.”