This is the first time I have ever finished something like this. So even though you cannot see it, I am sitting here drinking a cup of coffee and giving myself a huge pat on the back. Even though.. I completely missed #27. I cannot for the life of me figure out what happened to it. I  know exactly what song it was supposed to be, because as I was compiling a list I thought “…what happened to the other John Mayer song?” Sigh. Another double post. Oh well. At least I didn’t give up.

Song #31 Not Alone by Darren Criss

I knew this song would be my last one. 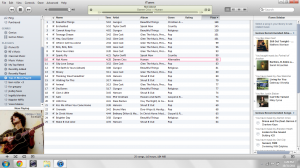 There it lives, holding steady in my top 25 most played. If you were to somehow make a playlist that was “most often played,” like given the amount of days its been in your library and how frequently you listened.. that would be #1, without a doubt.

Over on Annie’s blog, she asked us about our songs that make us feel courageous {she’s been writing about courage for 31 days} and this is what I said after commenting with this song:

I tend to need courage the most when I’m already beaten down, so many of mine are ballads so that when I’m listening to “sad” music and crying in my room, I get a bit of a kick in the butt, a bit of safety in numbers if you will.

I say “safety in numbers” SO OFTEN, because I believe that we all need to really understand it. Alienation and alone-ness can destroy people and have sparked terrible terrible actions. There are people that can relate to our pain, to our hurt, our loneliness, our fears and doubts and worries. They might not be sitting in the same room, but THEY ARE OUT THERE.

Someone wrote about this song on Tumblr, and I commented how strange it is to feel safety in numbers sitting alone in your room and listening to a song that says “You’re not alone, cuz I’m here with you.”

It’s just a great, beautiful song. I made Cassie a mix CD and put this song on there and she loves it too. I will take over the world and make everyone love this song. One person at a time.

When I lived in Seattle and was still going to school, I watched the Any Given Thursday performance of this song EVERY MORNING BEFORE SCHOOL. There was something about this song that gave me peace and energy. It’s the sequel to the song “City Love,” written in the wake of 9-11.

And once I had this crazy idea for a story, one that was based off of emotions I felt from songs. This song was the basis for the whole story. I kept all of my pieces of paper with the plot and characters and moments, just in case I ever felt like actually doing something about it.

I love these songs. and many more, but I only did 31 days of song. If you want a couple CDs with all of these songs on them.. e-mail me. Or leave me a comment here and I’ll e-mail you or something. I love sharing.