This morning I almost w0re a skirt, but instead decided to wear this lovely vintage red dress that I only recently decided I really like. After church, I considered going straight home but decided at the last minute to pull over at my favorite Starbucks.

As I was walking in, this wonderful older lady told me that my dress was beautiful, that she loved the colors and thought it was very cheery. I thanked her and we began talking. Her name is Irma. After noticing my Bible, she asked if I was a Christian and when I responded “yes!,” she told me about a musical going on at a church nearby during this Easter week. We walked around for a little bit until we found a promotional flyer on a store window in downtown Covina.

When it came time to part ways, she asked me if I could keep her in my prayers. So I prayed for her right then and there, asking God to bless her and guide her and love her so much. and then she said “it was no coincidence that we met today.” I replied “I agree, it was not.”

There’s this invisible wall between me and God right now.  I am shouting to him over it, and I know he is responding, but there’s something troubling that’s in the way. I’m not entirely sure I know what it is, but as I’ve thought more and more about it I’ve concluded that this wall is my desire to grasp the totality of God.

Donald Miller once said, “I can no more understand the totality of God than the pancake I made for breakfast understands the complexity of me.” 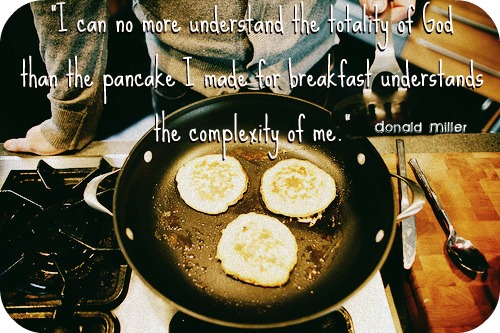 Thinking about God – and I mean God himself, not Christianity nor my response to God – gives me a headache. I close my eyes and concentrate on the dots in the blackness behind my eyelids, hoping God will reveal himself, that he will show me a glimpse of himself: as if seeing God will erase my troubles and my headaches.

But I know what I must do. I must let go and stop trying to understand. Nobody can answer the questions I cannot even begin to ask, and I don’t think God wants to satisfy my curiosity.

Side note: Two weeks from today, I’ll be heading towards San Francisco.. a little bit of a layover before moving back to Washington. Soon I will be in Washington, with people who love me. ….and it’s more sweet than bitter, though both are there.